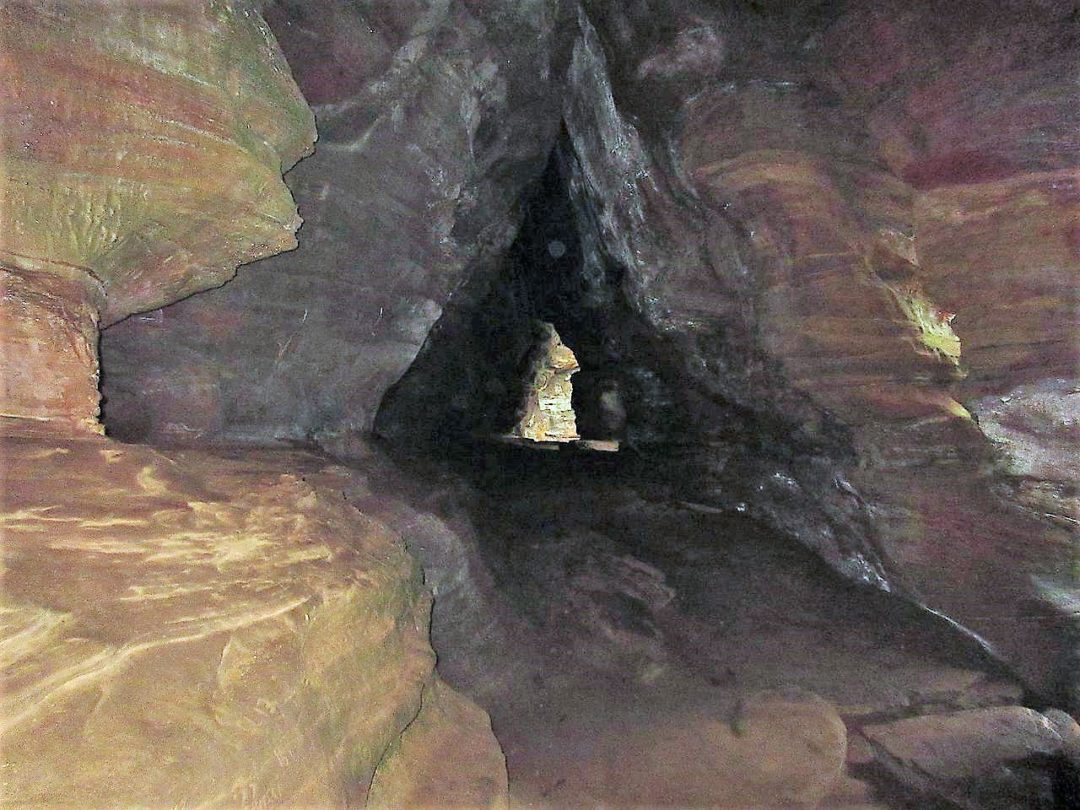 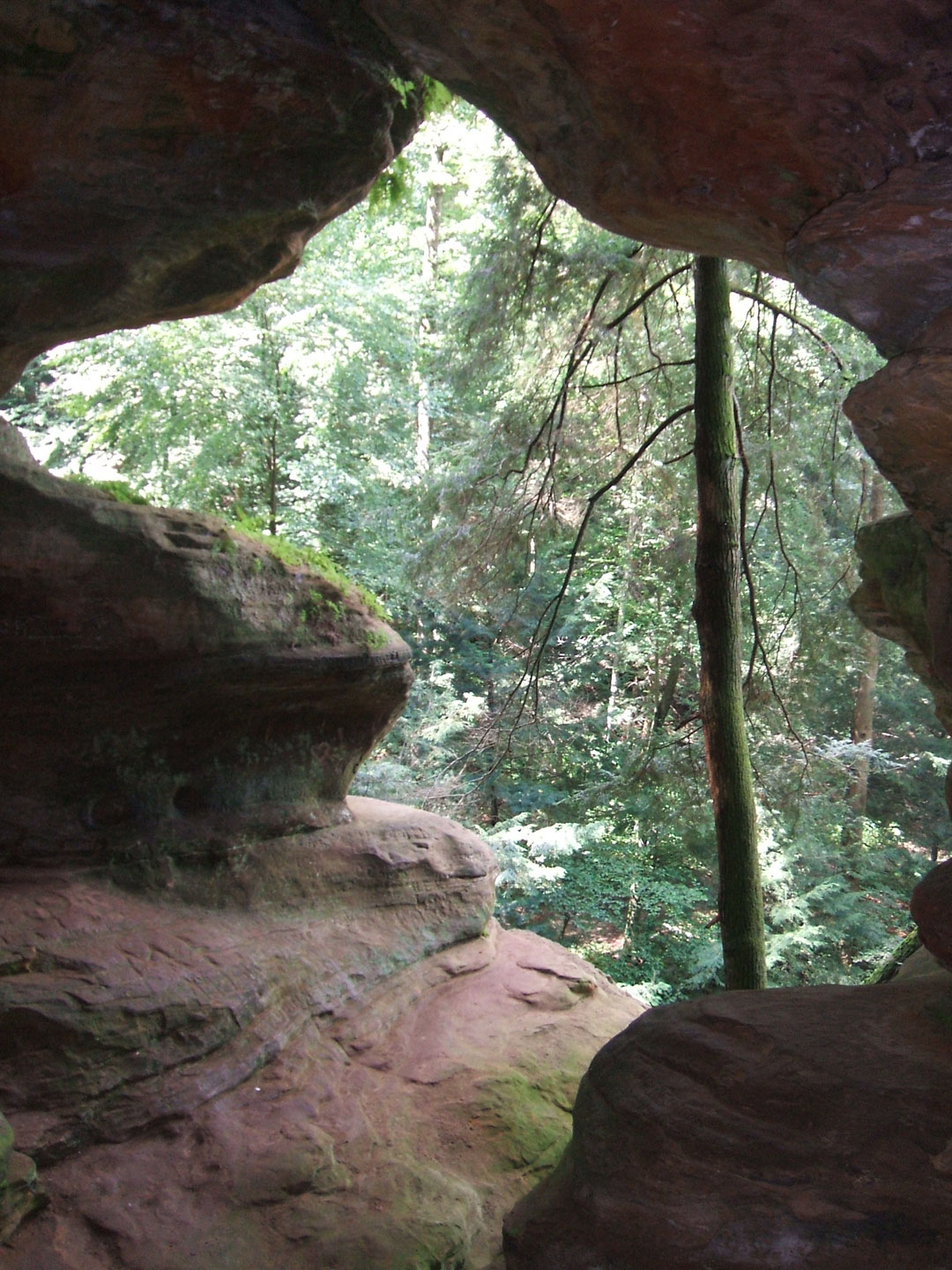 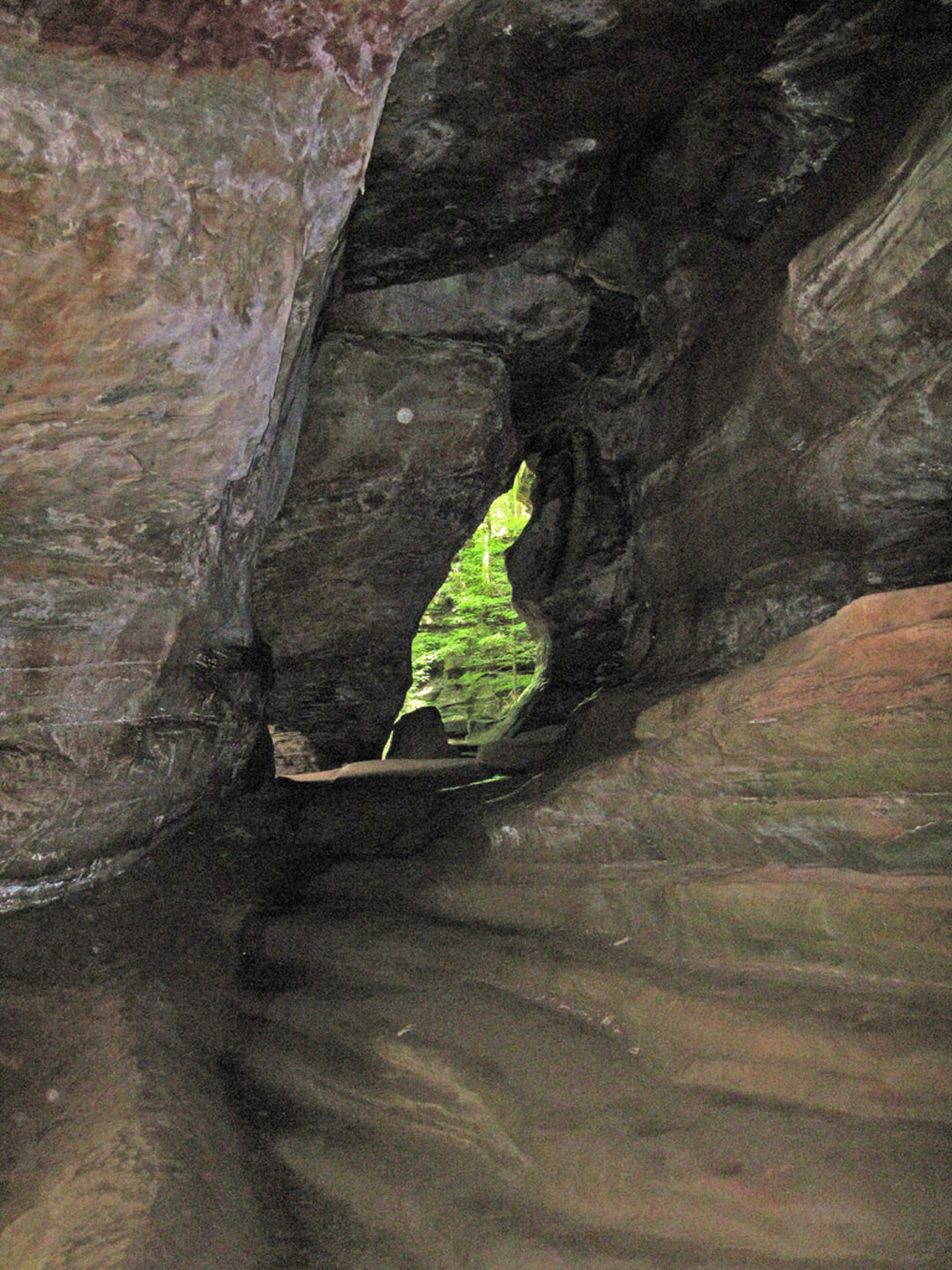 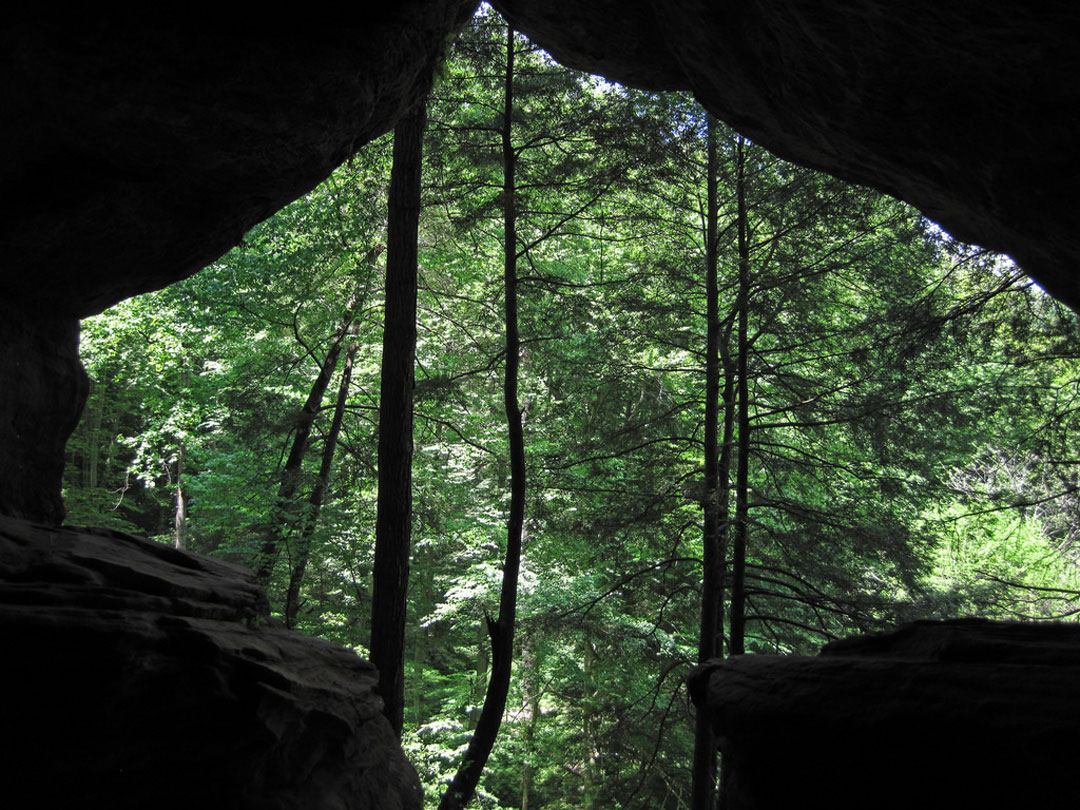 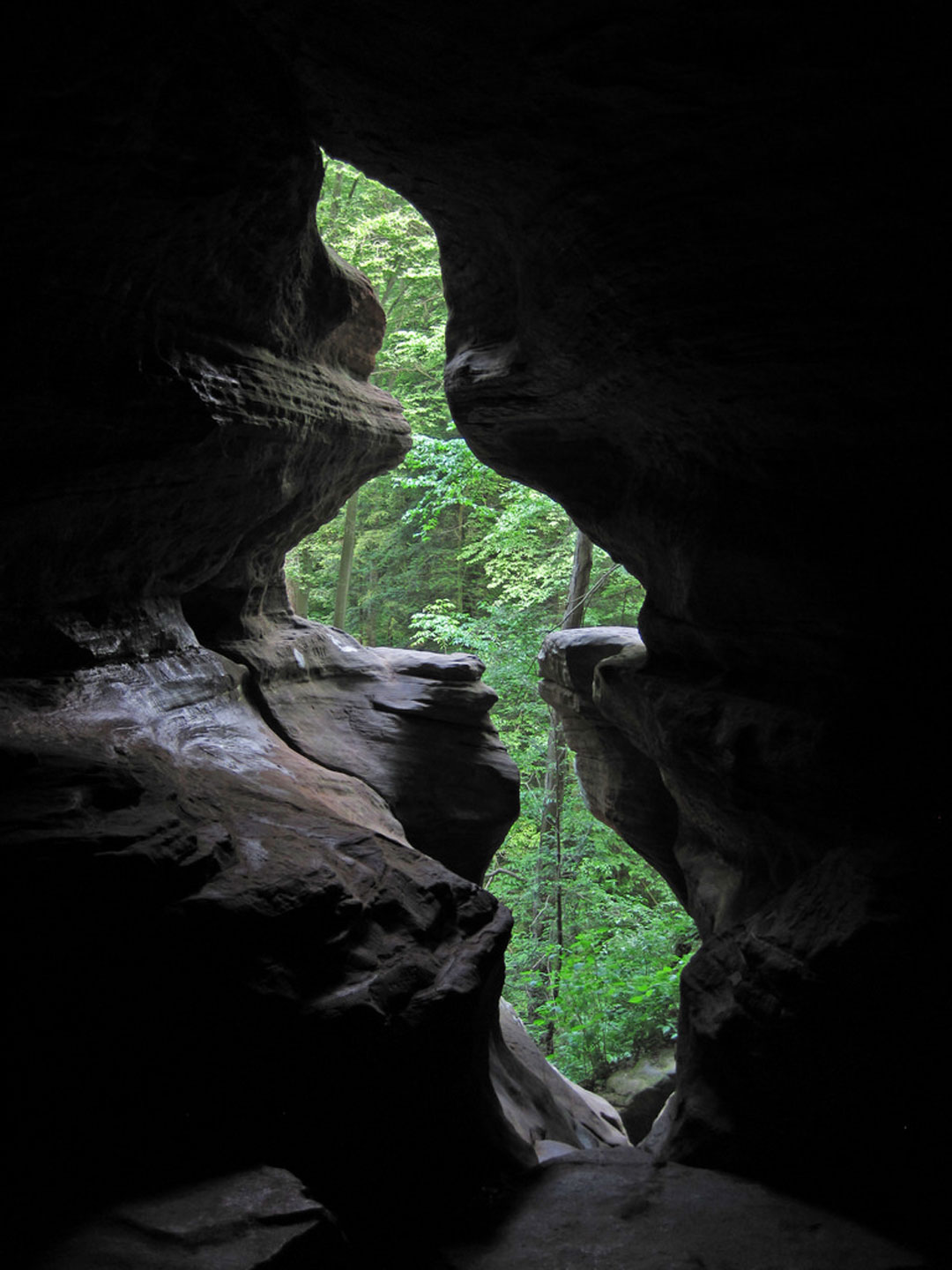 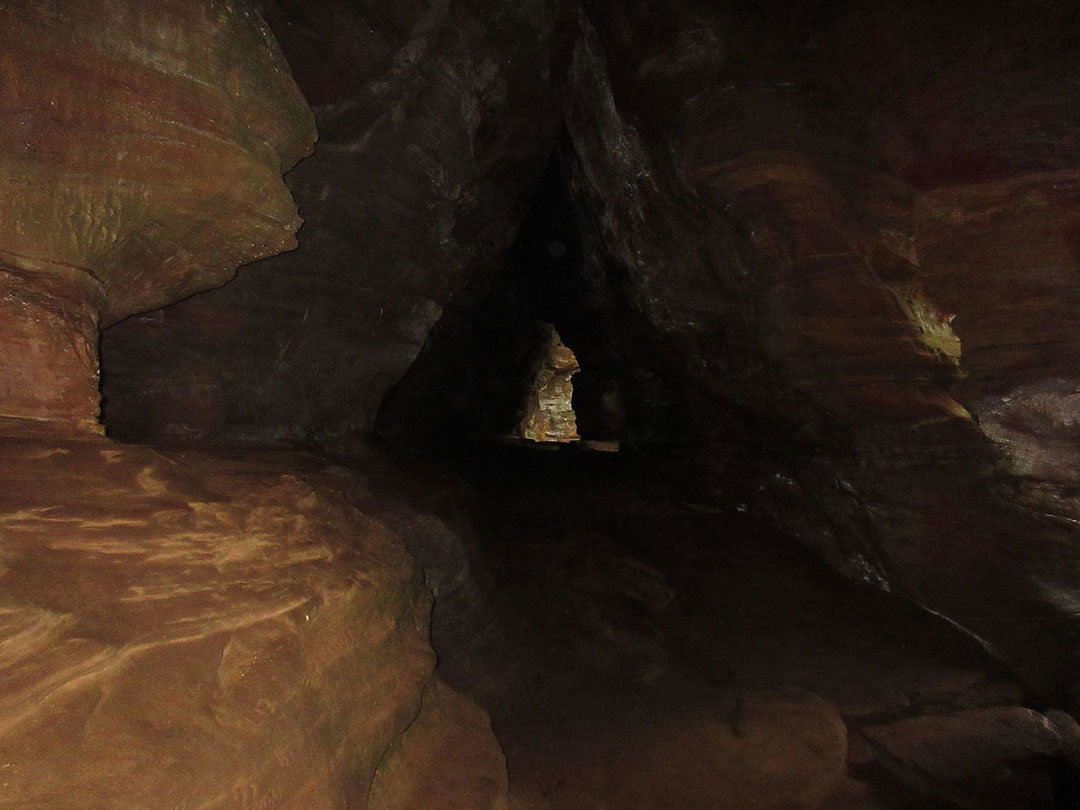 Rock House is unique in the Hocking Hills’ region, as it is the only true cave in the park. It is a tunnel-like corridor situated midway up a 150-foot cliff of Blackhand sandstone.

This House of Rock has a ceiling 25 feet high while the main corridor is 200 feet long and 20 to 30 feet wide. The cavern was eroded out of the middle zone of the Blackhand sandstone. The resistant upper zone forms the roof and the lower zone forms the floor. Water leaking through a horizontal joint running parallel to the cliff face caused the hollowing of the corridor. This main joint or crack is very visible in the ceiling of the Rock House. A small series of joints run north to south at right angles to the main joint. Enlargement of this series of joints formed the window-like openings of Rock House.

Nature has hewn out of this cliff the Rock House complete with seven Gothic-arched windows and great sandstone columns which bear its massive roof. As one might imagine, Rock house was used for shelter by past visitors. Hominy holes, small recesses in the rear wall of Rock House, served as baking ovens for Native Americans using the cave. By building a fire in the small recesses, the rock became heated on all sides, and food could be bakes in this crude manner. Further evidence of past use is the presence of chiseled out troughs or holding tanks found in the stone floor. When rainfall is abundant, springs of water permeate through the porous sandstone and flow into these troughs fashioned by man and, when full, continue across the floor and out of the windows. In this way, residents were able to maintain a small water supply in Rock House. According to local folklore, other not so welcome visitors frequented Rock House. Robbers, horse thieves, murderers and even bootleggers earned Rock House its reputation as Robbers Roost.

Rock House has a colorful past and has long been a popular tourist attraction. In 1835, Colonel F.F. Rempel of Logan erected a 16-room hotel compete with ballroom, livery stable and a U.S. Post Office. The hotel stood where the picnic shelter is today. Numerous dated carvings in the rock bear evidence of this area’s long-standing popularity. One such carving in the form of a book bears the letters: ITFBRAR – ITFFAWMTAW which means, In the fall, Buck Run bananas are ripe – in the frost fall, a wise man takes a wife. (Buck Run banana is local slang for the fruit of the pawpaw tree.)